Overcoming Social Anxiety With a Clothespin

Comfort Challenge – Pass It On!

I never would have known that a clothespin would have been a tool to help change my life.

But sure enough, it has. So much so that it’s helped me to reshape my thoughts about how I perceive social situations. A clothespin became an “intro” to taking on social ‘comfort challenges’ to a new level. A clothespin was the catalyst for new perspective on life.

I first learned about Comfort Challenges from a TED Talk by Till H. Groß titled, “How To Become More Confident – Lay Down On the Street For 30 Sec” (YouTube) or “How To Crush Your Comfort Zone” (TEDx).

While I wasn’t laying on the ground (a challenge I still have yet to take on!), the philosophy behind it got me thinking a lot more about finding my comfort zones and how it’s held me back. I was already getting eager to overcome my social anxiety and shyness and DI Globals 2014 helped to kickstart that in a few different ways and then again in 2015.

It all began on our third day down at Knoxville. We were wandering about one of the parks, admiring all of the pin traders that lined the entire park from one end to the other. Other supporters from our team were camped out along one of the sides. My sister was trading pins. Commotion was everywhere.

Our agenda meant we didn’t get to stay for too long. More trades were made as we made our way back to the vehicle to go find some place to eat. As I got into the vehicleand got situated, pulling my scarf (another comfort challenge!) free and swinging my bright orange bag off of my back I noticed something stuck to the very bottom corner. 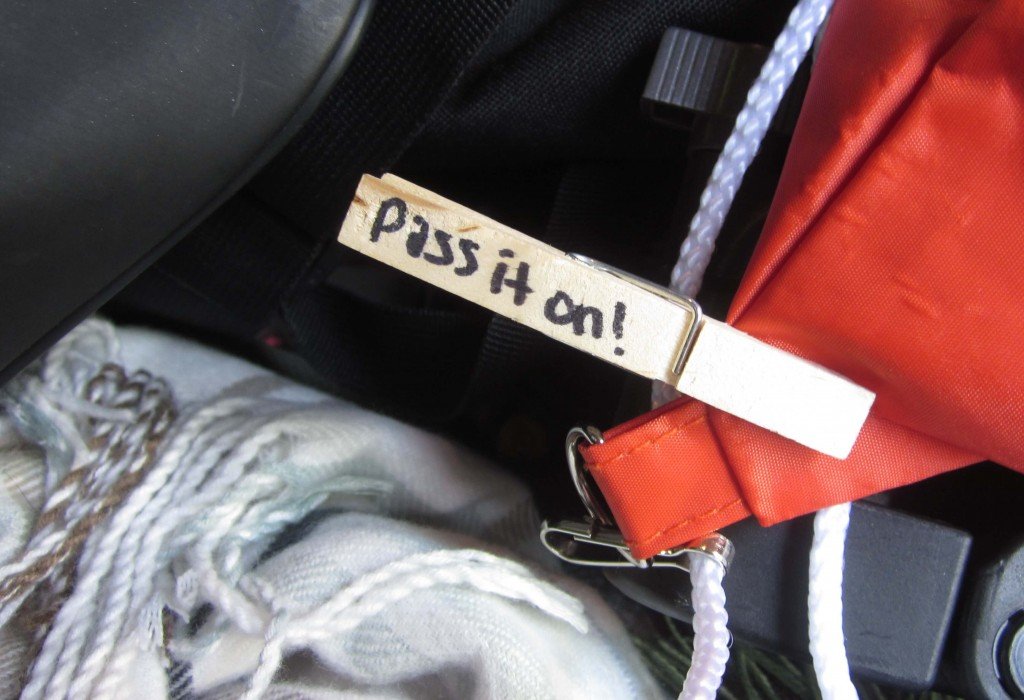 “A clothespin? How did that get there?” I thought, confused as to where it could have come from. Until I noticed some writing on it. “D.I.P.S. You’ve been clipped!” I pulled the clip free, turned it over and read, “Pass it on!” A stupid grin stretched my smile wide as it hit me. Someone somehow managed to sneakily clip the clothespin onto my bag without me noticing.

And then I was suddenly faced with a new dilemma. The unspoken pressure of being asked to “pass it on” quickly began to weigh on me the excitement of the moment had dwindled. I had plenty of time to think about it while we ate at a nearby Noodles & Company.

As anxious as I was about having to clip someone else with the same clothespin, I was excited by the idea. I had just been introduced to one unique aspect of the culture of Destination Imagination Globals. I wanted to be involved. I wanted to challenge myself. I wanted to conquer shyness and I wanted to get over social anxiety.

Description reads, “Pay it forward and pass these buttons out to brighten the day of someone else at Global Finals! [ok, keep one for yourself, too!]” – Team Michigan “Bucket Fillers” Project

So many opportunities presented itself to me over that period of time, but I failed to step out of my bounds to get pass the clip on to someone else. I had gotten close; ready; eager to clip it onto someone else’s bag. But my hand and the clothespin stayed in pocket. Fear kept its hold on me.

My little sister got clipped, too!

Two days later and I still hadn’t clipped anyone. Destination Imagination Globals was coming to a close and my time was running short. If I didn’t clip someone that night, I would be stuck with the clothespin and an everlasting reminder that I failed myself. It took those two days for me to finally overcome that fear.

I was standing in line with family for one of the face-painting booths (which was another impromptu comfort challenge and another catalyst for overcoming my fears). I already had a stunning scorpion painted across my face, so I was simply hanging out with family. And looking for someone to clip. I noticed: there are a lot more opportunities to clip someone when there’s a whole line of people standing still. How convenient.

I found my target. A black and yellow string bag.

After psyching myself up, I inched closer. In that moment, the world disappeared. Nothing else mattered. The clip was getting on that bag one way or another. There was a whole LINE of people and no doubt that at least a few of them behind me in line would notice. How did I manage to go unphased by that, which for years has crippled me from taking on opportunities and challenges?

I’m not sure, maybe it was persistence. Maybe determination. Maybe I had just “had enough.” Whatever it was that got me through it, I’m glad it did.

Because at the end of the day, I was the victor over fear. It’s amazing how significant a clothespin has been for me over the last year. It lingers in the back of my mind, both subconsciously and consciously as I strive to take on newer and bigger challenges in my life. To whomever snuck that clothespin onto my bag, thank you!

But it doesn’t end there. One year later, I took it to another level.

Another giant step out of my comfort zone.