Comfort Challenge – Pass It On!

I talked about how a single clothespin helped me to overcome another layer of my social anxiety and shyness. But I’ve come a lot further in just a year. We’re back at Destination Imagination Globals 2015. I knew what to expect. I was a little more prepared. This time around, I’m eager to do some uncomfortable and challenging things.

It’s the Year of the Arena and I’m halfway through Venture 15.

Even with a better inclination of what to expect, I still wasn’t prepared like I thought I was. Instead of being overwhelmed with the sheer size of Globals, this year I’m overwhelmed by all of the incredible challenges I’ve set and conquered, the barriers I’ve broken, and how much my eyes had opened.

I kept an open mind about the types of challenges I’d like to do as I prepared for the trip down to Knoxville, Tennessee. While I couldn’t plan out every single encounter, I was at least far more prepared mentally. In the past year I’ve accomplished more, challenged myself more and have grown quite a bit since my last visit.

As we entered Knoxville and the atmosphere of Destination Imagination returned, the memories of last year quickly began to flood in. I heard someone in the vehicle say, “It’s almost like we never left!” We went down the same roads, saw the same buildings, saw the same huge crowds traversing the campus. It was good to be back.

That evening we stopped by a local Walmart that was right next to a part of the campus to pick up some supplies for the rest of the vacation. It was incredibly hot and bright down in Tennessee, so this meant sunglasses, shorts and sandals.

Globals, it was time for a little payback! 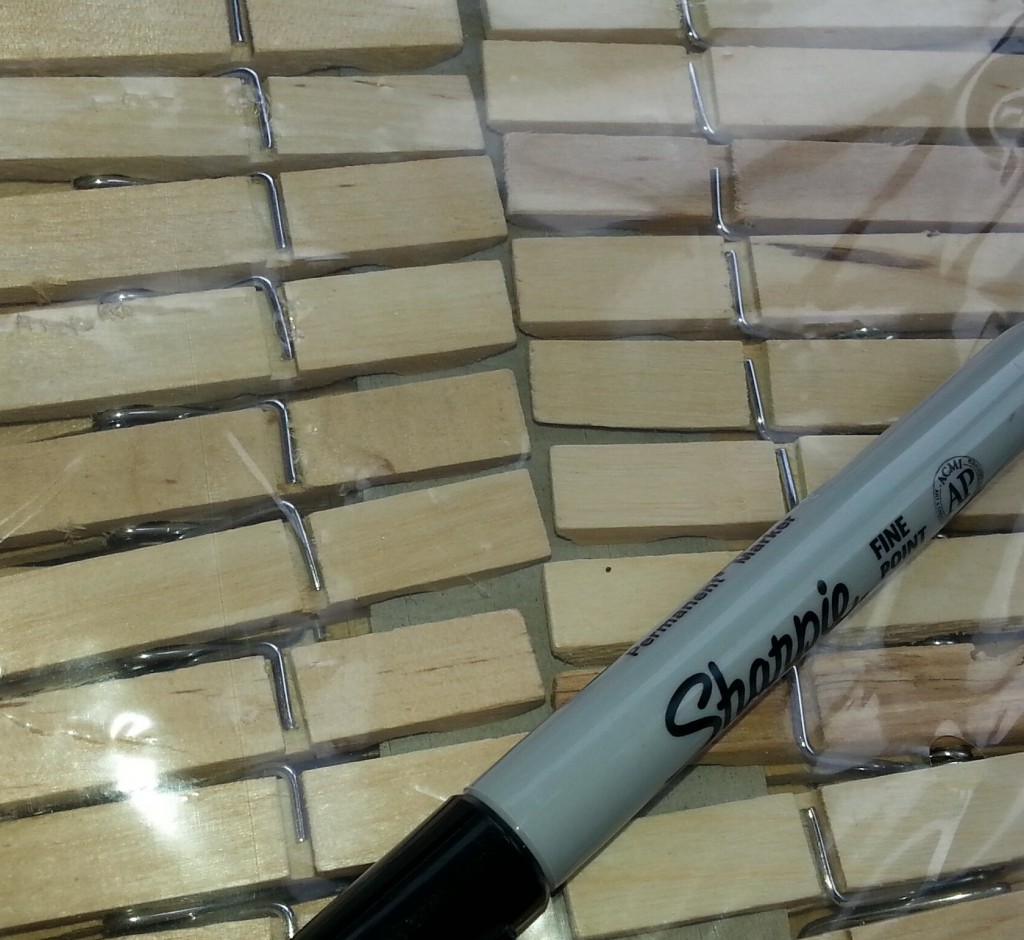 Tools of the Trade

In the spirit of creativity and courage, I wanted to give back to that which gave to me. Last year I was introduced to the “Pass It On!” clips and clothespins that make their way around the massive Destination Imagination Globals community during the event. What I didn’t realize back then was that these clips were individuals, teams or supporters’ ways of getting involved in the community in a clever, creative and subtle way.

Now equipped with 50 clothespins and a sharpie, I began to write various notes on each side of the clip.

It didn’t take long before family also got involved, wanting to write messages and help spread the clips out through the DI community and onto unsuspecting bags, coats, jacket hoods or loose bits of fabric. 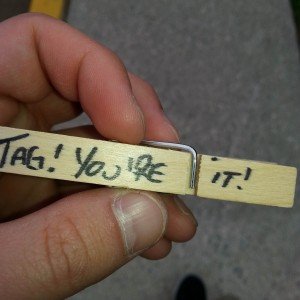 Who knew clothespins could be so fun? 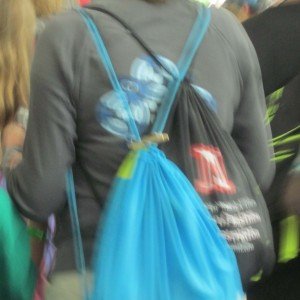 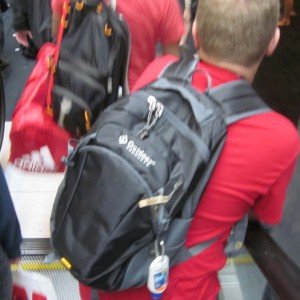 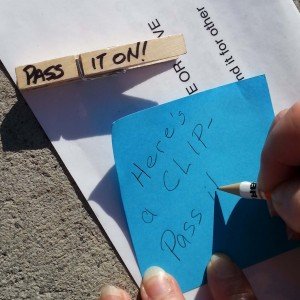 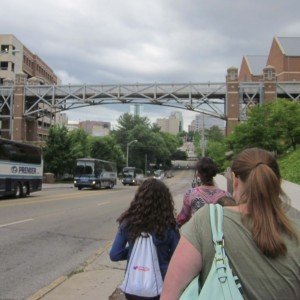 Tailed behind another DI group going the same direction, waiting to strike. 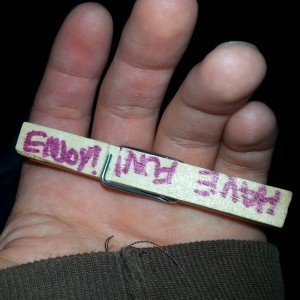 … but they managed to clip US instead! 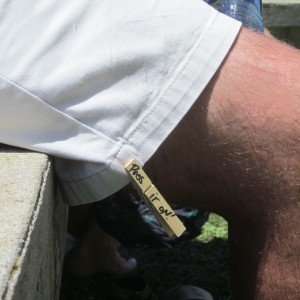 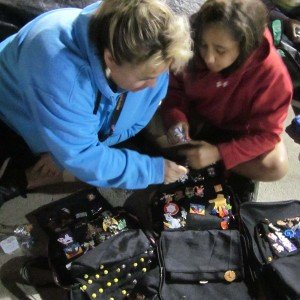 The Purple Bear – First time I got ‘caught’! 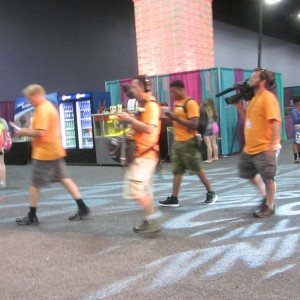 Even the camera crew!

The difference between this year and last, despite having fifty more clips to distribute, was that I was ready to take on the discomfort of what the “Pass It On” clips would entail. I still got nervous, anxious, or feared getting caught (I did, once!). The difference this time is that I did it anyway.

I found that once I made a decision to clip someone, I focused on that and not on all the issues that might come up after. I avoided mentally “putting up the umbrella before it rains.” I acted quicker. I pushed other thoughts out of mind, swooping in when the time was right, even with the fear of getting caught by them or onlookers.

And each time it had the most satisfyingly profound effect on me.

While I didn’t get a picture of every single clip I put out, a few experiences really stood out with me over the course of the event.

The Table On Wheels

While I was exploring one of the buildings on campus on own, I was making my way down to the Expo Center. Along the way, I noticed one of the workers in the food area trying to pull a long table, filled with various food items and beverage dispensers, across the hall. Doing so by herself, the opposite end of the table was moving at a lopsided angle, making it difficult for her to get through the crowds.

I had a moment of inspiration and I could feel myself wanting to lend a hand – she was pretty too, so that might have been part of it. However, just as quickly, I felt myself holding myself back. Giving myself reasons not to lend a hand. “I might make it worse,” “she’s probably done this a hundred times before,” “what would other people think?” Among others. But that last one is what got me to take the leap. Once I recognized that I was being more concerned about what other people would think of me, rather than wanting to help someone else, I got fed up with my own thoughts and pushed everything else out of my mind – my worries, how I might be perceived, the consequences – and just went for it.

After moving forward at a quickened pace, I grabbed the far end of the table and tried to keep it steady as the girl on the other end weaved it through the crowds in the convention center. I thought I saw her mouthing a silent ‘thank you’ once she noticed. The table didn’t need to go far and after she thanked me for the help, she disappeared behind one of the large doors in the wall, never to be seen again.

Although, I had clipped one of the “Pass It On” clothespins to one of the beverage containers for her or the other workers to discover later. 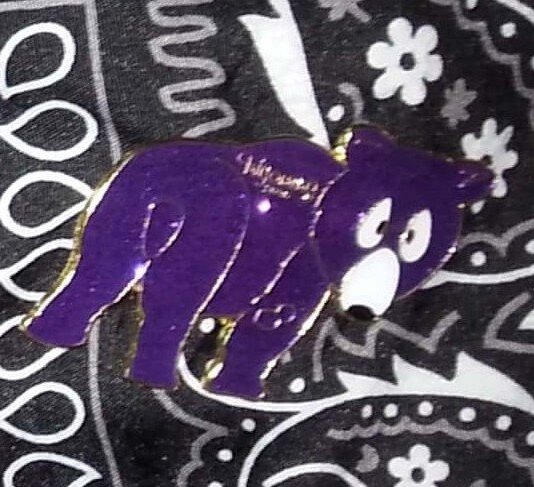 While we were visiting one of the other activity centers at night, I was making my rounds through the pin traders, looking for some final trades. Looking for any of the pins I still had my eyes on and to trade away some of the duplicates that I had. This was when I met a couple of women who were sitting and stationed to do the very same thing.

As with the nature of pin trading, many people came and go; some people were after a specific pin and it only took a quick glance or inquiry to determine if it was worth sticking around. I sat down to take a gander over the pins they had to offer, waiting for the other traders to finish their trades and questions before chiming in.

We had a small conversation and eventually made our trade. I can’t even remember exactly what the trade consisted of because of how the whole experience made me feel. I likely traded one of our Indiana geckos for one of her pins. Before I could leave, she insisted that I take another pin. I told her that I was happy with the trade, one for one, but she wanted to give me two pins for the one I had. She insisted. Maybe it was because she knew I was new to pin trading, or maybe she just wanted to get rid of some old, unwanted pins.

Whatever the reason, I had the one pin I was after in addition to a purple bear. I wish I remembered what state it was from or that I had kept the pin in the long run, had I known the impact it was going to make.

We said our farewells and I began to depart. After wandering around some and giving the encounter some thought, remembering I still had some clothespins leftover from the day, I returned a few minutes later. In plain sight, I reached down and clipped one of the few ‘You’re Awesome!’ pins to her pin-trading book. As I was standing, I could see her glancing up from it to give me a confused look. I smirked a little, turned and walked away.

While I didn’t use every single clothespin myself, I distributed some of them to family, team supporters and team contestants. To me, this was just as beneficial. I had to explain the purpose of the clips and even offered a few to people to try out for themselves. Some knew exactly what they were; a tell-tale grin was all I needed to know. I may not have gotten around to using every single clip, but they still served their purpose: helping me connect with others and making a subtle impact on their day.

Looking back, these “Pass It On!” clothespins are an amazing idea in their own unique and subtle way. I continue to look for ways to bring this into my world. How can I use the same philosophies and practices in my daily life? How can I get more involved in the circles and worlds that I love? What creative ways can I connect with others? How can I create amazing memories and experiences in the world around me?

These clothespins only grace the surface of what Destination Imagination has done for me and my level of confidence.