Little did I know just how big of an impact this trip was going to make. Some of the experiences I had during this trip were absolutely profound. And is by far one of the most influential events and experiences to date for 2015 & Venture 15.

The first day of the trip. Spent mostly on the long drive down to Knoxville, Tennessee for my sister’s Destination Imagination Globals 2015 competition. This is the second year she’s gone – and the second year I’ve been fortunate and grateful to be able to tag along. This time, I had my expectations set a little higher now that I’ve had previous experience with last year’s Destination Imagination Globals. But I still wasn’t prepared for what I would experience over the next few days.

My “trip” began the night before, hustling to complete a large online project for a client. That and excitement makes it incredibly hard to fall asleep. I even worked a little on Project Quickstep, another project to pursue a personal interest and overcome some fears in the long-term. When it was time to depart, I hadn’t the chance to get to bed, which meant I did a good amount of sleeping on the way there.

At one of our rest stops, I had my first experience with getting over a moment of social discomfort and doing something I was, on the spot, inspired to do but had to get over the fear of doing it. As simple as it sounds: signing a guest-book at a rest stop. Had I been presented with the opportunity years ago, I probably would have shied away. “Oh, I don’t really need to.” “What would other people think?” “What would my family think?” This time? Those same questions were so trivial, I almost didn’t think twice on them. I held a split-second instinct and told myself, “just do it!” and went with it. Nothing grandiose, but it in a small way helped to set the stage for the rest of the trip. Funny thing is, I don’t even remember what state it was in.

That mentality is quickly becoming the front-runner of a lot of my initiatives surrounding combating social anxiety/shyness and pursuing the goals that actually matter to me.

After about seven or eight hours, we made it to Knoxville. The Globals event spans across the entire University of Tennessee campus. We dropped the team members, that we were driving down, off so that they could go swim. I quickly realized how warm it was down there in Tennessee and just as quickly regretted wearing long pants. Too bad that almost my entire wardrobe consisted of long pants/jeans!

As we were killing time before the opening ceremony, we went to one of the restaurants we visited last year: Zaxby’s. I probably even ordered the same thing I did last year, too. Probably sat in the exact same booth.

During the initial drive through the city, we quickly realized just how fast construction was being done down there. Last year, there was an apartment complex being built right next door to Zaxby’s. When we went there last year? Boom! Done. Furnished. We saw this kind of progress throughout the entire city. Although just like last year, there was a lot of construction going on, but in different parts of the city. It was cool to see some of the progress throughout the city over the course of a year. 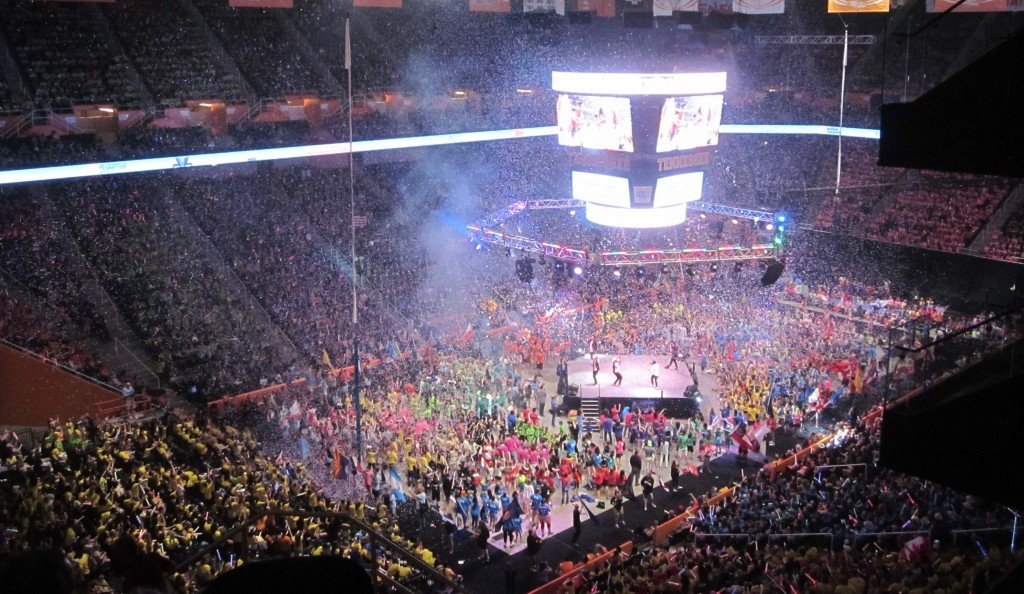 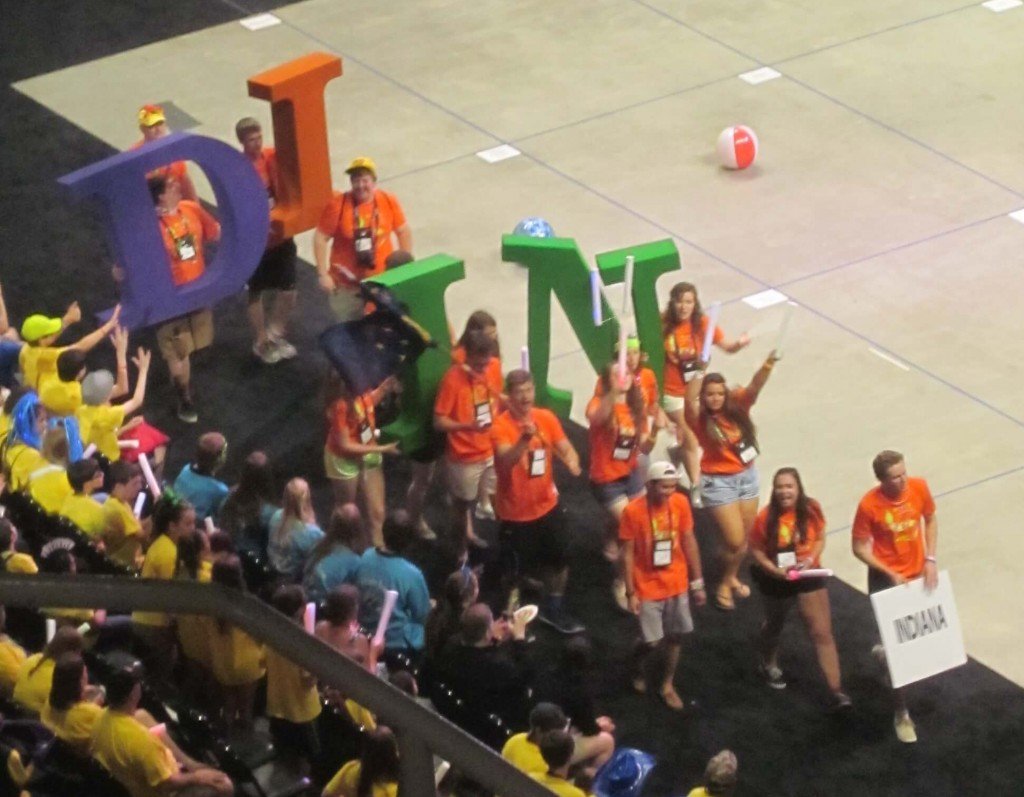 Then the Opening Ceremony began. Both the Opening and Closing Ceremonies last year were very inspirational and touching, in a way. The ceremony was a great precursor to set the mood and atmosphere for the entire event over the course of the next few days. An entire stadium was filled from the central floor to the top stands, with both competitors, team members, volunteers and team supporters (us!).

During the Opening Ceremony, the majority of the event was MC’d by an acapella group (of which I didn’t catch the name). We got to watch Buzz Aldrin from Apollo 11 talk to the competitors and finished off the ceremony with a curtain gymnastics act. It was great to see that other large organizations like NASA and Disney help to sponsor Destination Imagination Globals.

During that time, I learned that Kelly from Faces Gone Wild was going to be present at Globals. Last year, I had a very profound experience as a result of one of Kelly’s face-paintings. For someone who was painfully shy and was in the middle of trying to overcome that shyness, that experience involved a couple of few challenges that I put myself up against. It involved both psyching myself to do something that was out of my personal norm and the norm of what I “thought others expected of me.” And it involved a social experience I couldn’t even conceive until the paint had touched my face.

Knowing that there might be a possibility she would be there again kept me in high hopes the entire time I knew that I was going to Globals 2015. And then learning she -was- going to be there made me even more excited. I wanted to make sure that I didn’t miss the chance to meet her again, so I reached out to her. (I’m getting a lot better at reaching out for things that I want!) Eventually she got back to me and I learned when and where she would be around. Not until the last day, but I had that lingering in the back of my mind during the ENTIRE event. Couldn’t wait.

On our way back to the vehicle, people were pouring out of the arena where the ceremony took place. Lots of people running about, trading pins, talking with one another, and so on. Thousands of people. On the way back, I had a mini Mystery Girl moment with one of the people we were walking past. I assumed she was a photographer of sorts, but that momentary gaze we had was alluring in such a way I couldn’t describe. I wish I said something. As I continue to fight back against shyness, these “Mystery Girl” moments are what inspire me to speak up or do something. Looking back, it probably helped to subconsciously fuel some of my more profound experiences over the following days.

Before we made it back to the hotel, we stopped by a walmart right next to the campus. A two-story Walmart; a complete garage on the bottom level and the shopping center up above. Hadn’t seen anything like it before! Picked up a few items that, for the longest time, I hadn’t owned: shorts, sunglasses and sandals. I also picked up some clothespins for a very special project and challenge. More on that later in the series and here (link pending)!

Made our way back to the hotel and proceeded to stay up for about 4 hours finishing up my largest client project to date, chatting with friends and otherwise browsing inspirational and uplifting content.

All in all? Not a bad way to start off Globals and the vacation.