Day of the Scorpion

Day of the Scorpion

In 2014 I got to experience what is now my all-time favorite event: Destination Imagination Global Finals. I wasn’t a participant, I wasn’t a volunteer, I wasn’t a staff member. I was just a visitor, a supporter of a team – my sister’s team. By all technicalities, I wouldn’t even have this experience if it wasn’t for her. 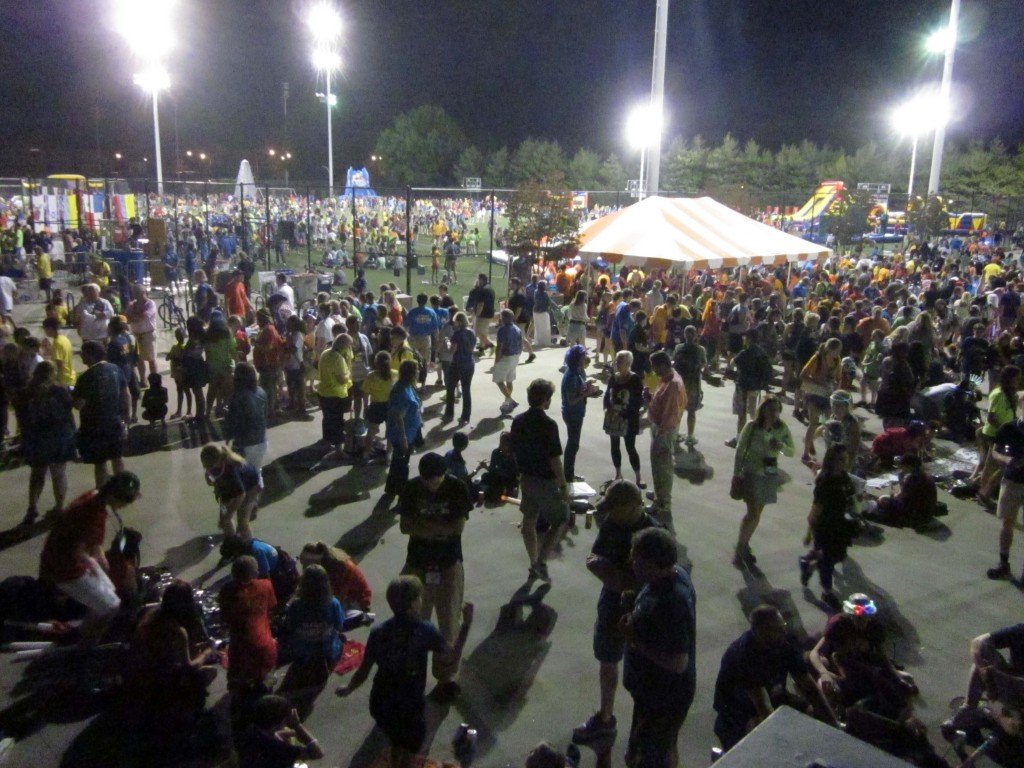 During the last night of this event, I did something that pushed me out of my comfort zone. And the result was that I ended up experience something very, very unusual for me. For others, it wouldn’t be that big of a deal. Growing up as a shy and quiet kid, what happened was pretty profound.

As part of the event’s final celebration, everybody gathered at one of the athletic centers. The place was packed. The parking lot, the tennis field, the aquatic center was all jam-packed with kids and adults. You could go anywhere without walking by someone or seeing pin traders. 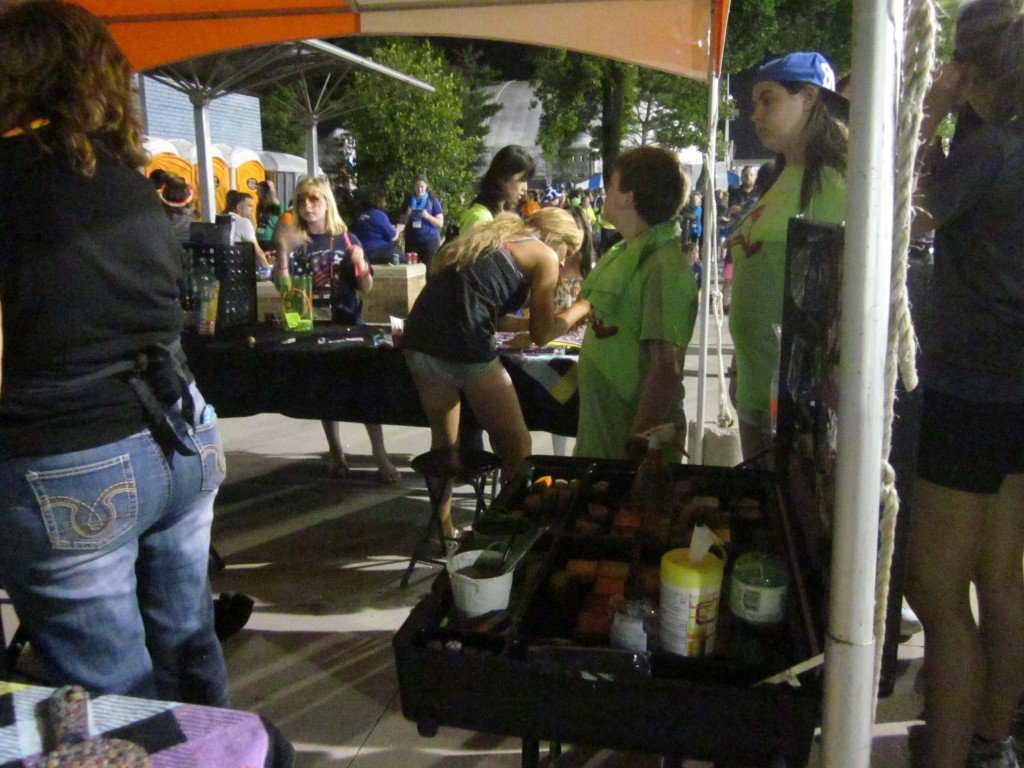 Among one of the many tents and activities was a little event called ‘Faces Gone Wild.’ Under the tent was a small group of people doing little glitter tattoos and face paintings. There were all kinds of tents like these set up and they usually had crazy long lines.

During my time at Destination Imagination Global Finals, I was slowly trying to push myself out of my comfort zone, try new things and have unique experiences. In short, I was trying to overcome my social anxiety and shyness. And while I was there, an opportunity presented itself: do something unusual, be recognized as a little abnormal for what I was “normally” like and step out of my comfort zone.

So I got in line. Which is also where I happened to crush another social anxiety challenge with a clothespin!

By the time I made it to the front, I realized that most people had picked out exactly what they wanted – based on a poster near the front of the line. It had quite a selection of different animals and designs, but I hadn’t picked anything out.

By the time it was my turn, she asked what I had wanted. With a little grin I said, “Surprise me. With one condition.” I essentially had given her free reign to paint whatever she wanted in exchange for a picture with her after she was done. Five minutes earlier I didn’t even have the idea of getting my face painted. Now here I am stepping out of my comfort zone and making a strange request at the risk of being rejected. 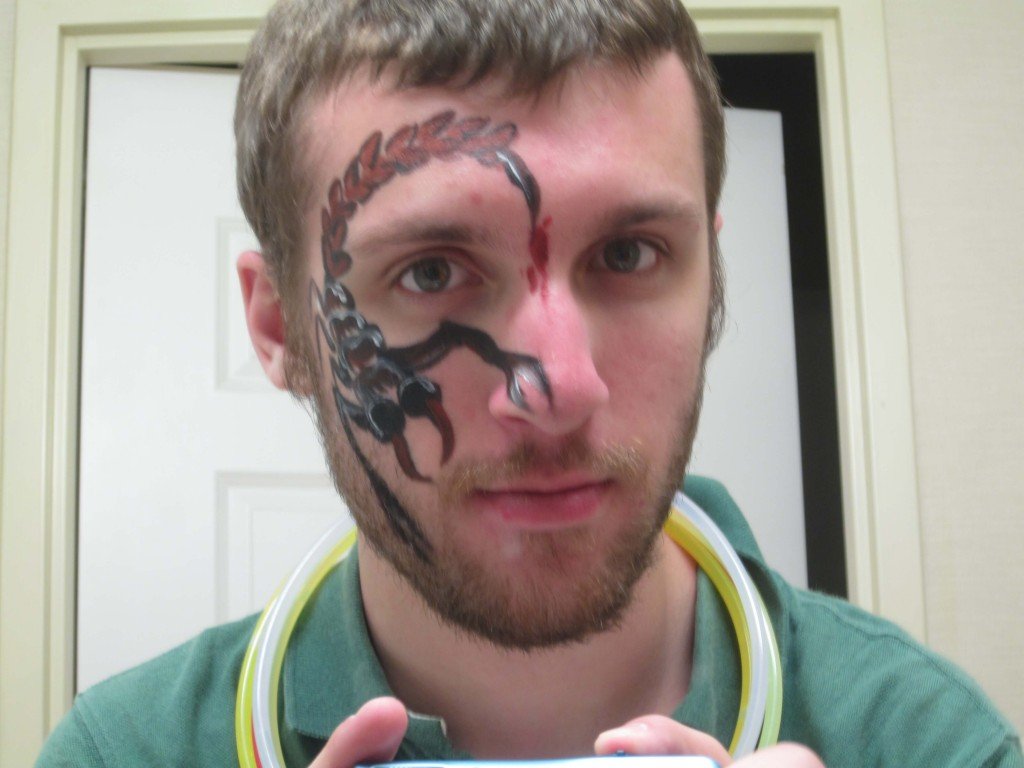 I had gotten my picture and figured out that I now had a scorpion painted across the side of my face. It was pretty badass looking. But the magic didn’t stop there. I had conquered the idea of stepping out of my comfort zone, ran the risk of being rejected and came out with a success on the other side. There were some side-effects I wasn’t expecting.

I got looked at. Not just by a couple people, but by a LOT of people. There were thousands of people here at this event and now I couldn’t go anywhere without being looked at or glanced at. When you’ve spent so many years being shy and trying to avoid being looked at, I noticed every single one.

Something a little more strange happened, however. For some people, when I looked back… they looked away. They had the shy glances, not me. Once I had walked by and tried to offer a polite smile back to a few people, only to have them look away, it offered some incredible perspective to how far I had come. Sure, I had a tool in-hand – or rather, on-face – but it gave me the perspective to realize that it only took some paint for me to feel like I was on top of my shyness. 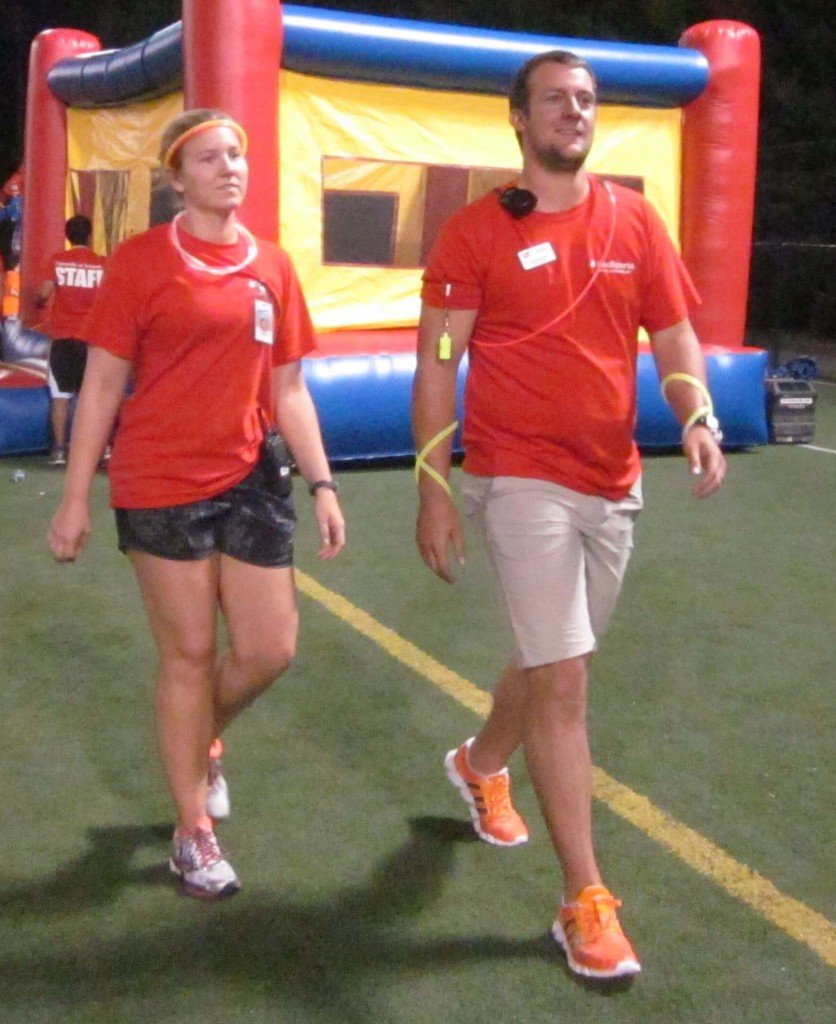 I got to overhear conversations as I passed by event staff mentioning something like, “That face-painting lady does a really great job,” or have people tell me out of the blue, “Whoooa, that is SO cool!” It wasn’t anything I did; it was all Kelly.

It wasn’t until a year and a half later that it really clicked, as I write this, where Kelly’s company motto comes from:

“You are the canvas and when I am done, you are a walking work of art.”

A walking work of art; how true it felt as I look back at my experience. For some young ones, face-painting is awesome. For others, it isn’t too big of a deal. For some adults, it’s seen as childish. To others, it’s silly.

For me, it was transformational. Eye-opening.

In 2015 I got to meet the same women that made it happen, in the same place, during the same last night of the event. After what I got to experience in 2014, there’s no doubting that I was going crazy on the inside, hoping I would get to share the same experience and meet her again. I happened to check Facebook sometime throughout the event and just happened to see on my feed that she was going to be at Destination Imagination Globals. To say I was stoked was an understatement.

This time, I had a better idea and expectation of what was going to happen. I didn’t have the same ‘transformational’ experience, but that’s because I already got through it during the first year. I was much calmer, however, and that realization made me identify how far I’ve come in just a single year. I wasn’t nearly as anxious as I used to be. While I’m still not as eloquently spoken as I would like to be, I was no longer terrified of the idea of conversation.

I got in line again. And I offered the exact same offer as before.

“Whatever you want, but we have to get our picture together!”

Of course, she agreed. 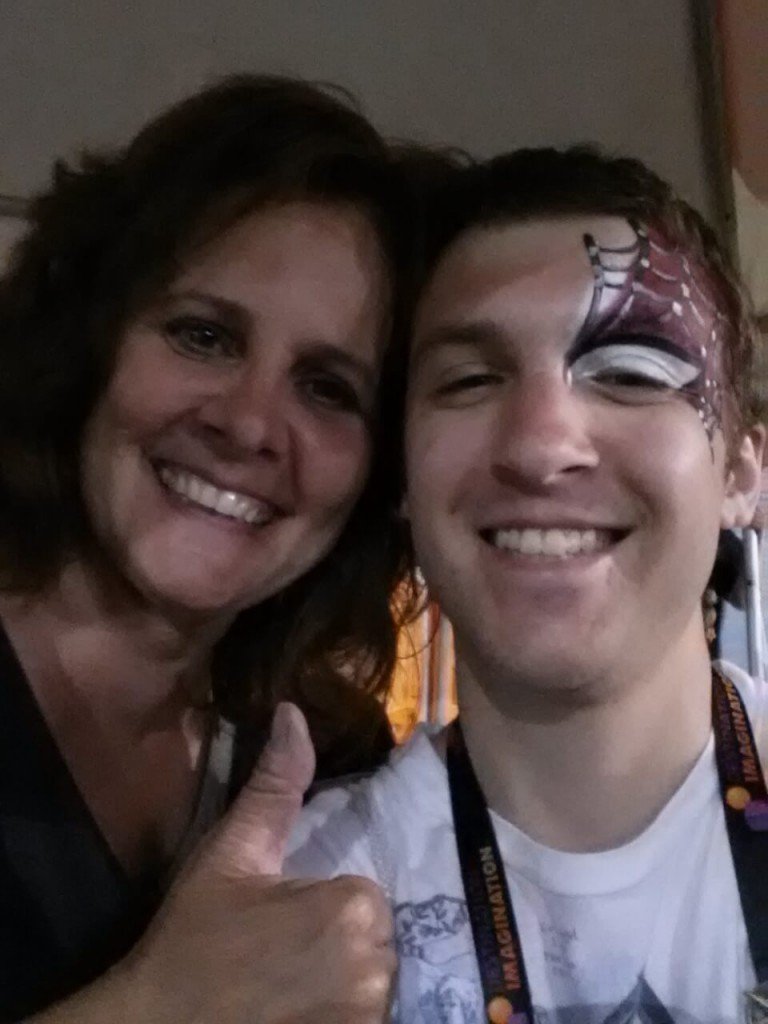 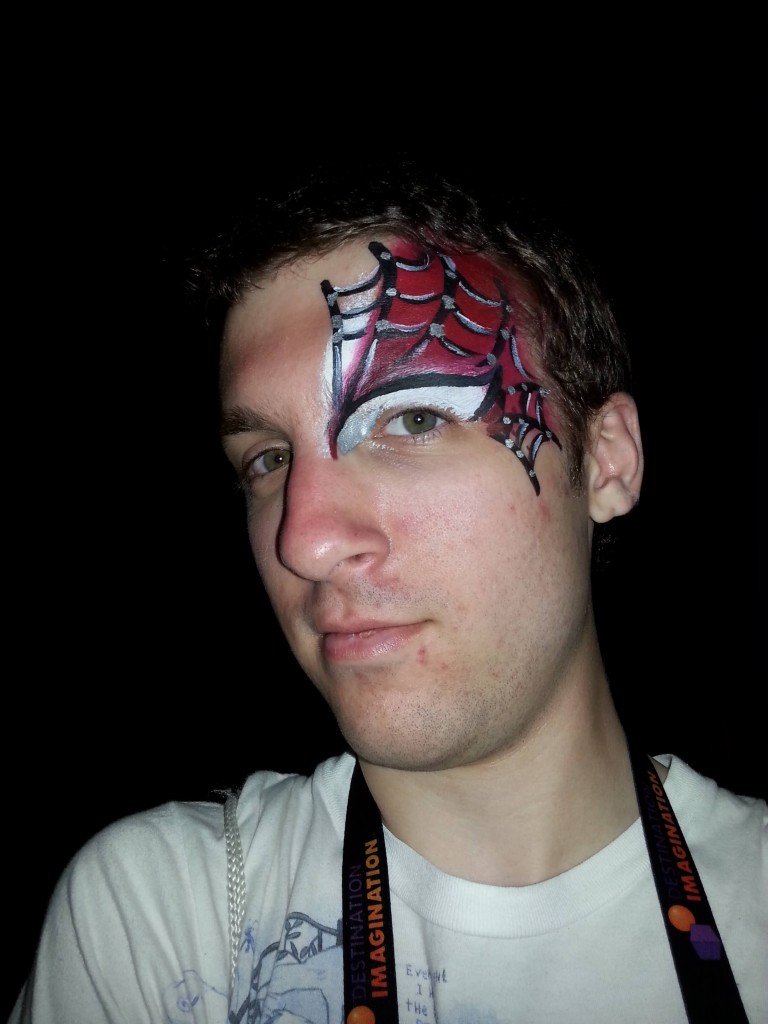 The new face-painting actually made for great conversation starters. Maybe I can cheat shyness by using similar ‘tools’ to help open doors up for conversation in the future.

Walking through the adult section of the grounds I had people asking me about the face-painting, telling me how awesome it was. I even got to strike a very small conversation with a girl who wished she could have come down to the tent, too. “I want to get a Batman one!”

I never would have thought that face-painting, of all things, would be one of the experiences that would help me to overcome shyness. But sure enough, having a scorpion painted on my face was not only an experience that provided me a lot of perspective, but it easily became one of the highlights of the trip -and- the entire year. When I look back at 2014, Destination Imagination Globals was an awesome experience and Kelly took it to an all new level.

If I had to pick out one event, out of the many great things that I did in that year, that summarizes my entire year…

It would easily be this one.

The Day of the Scorpion 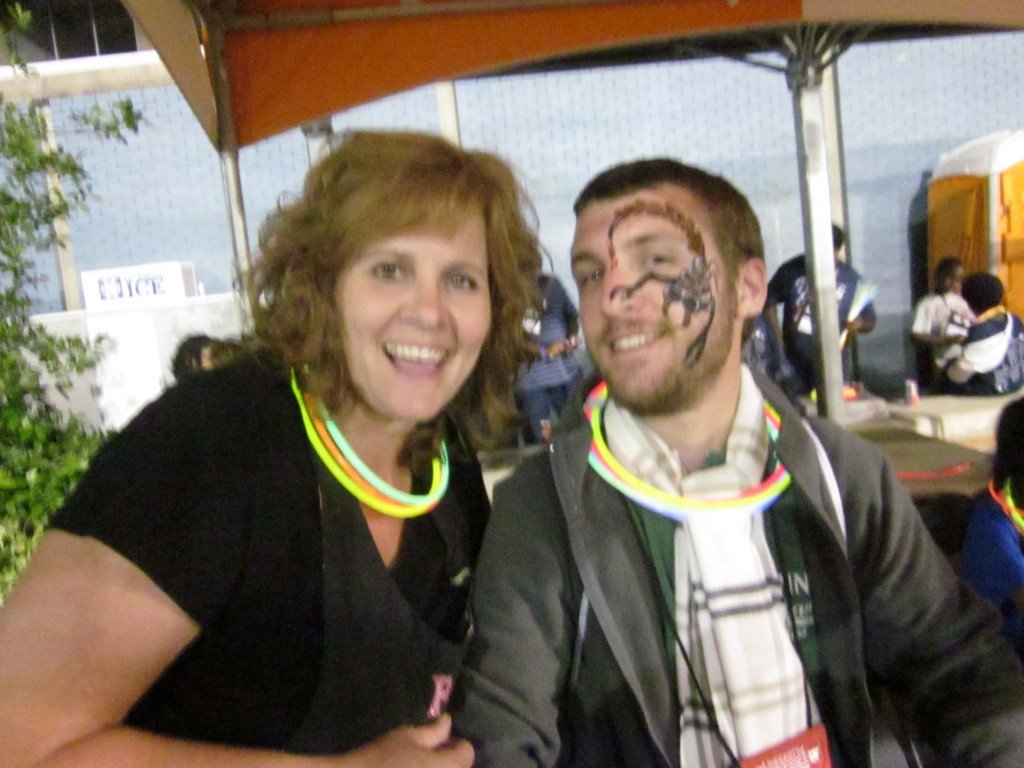 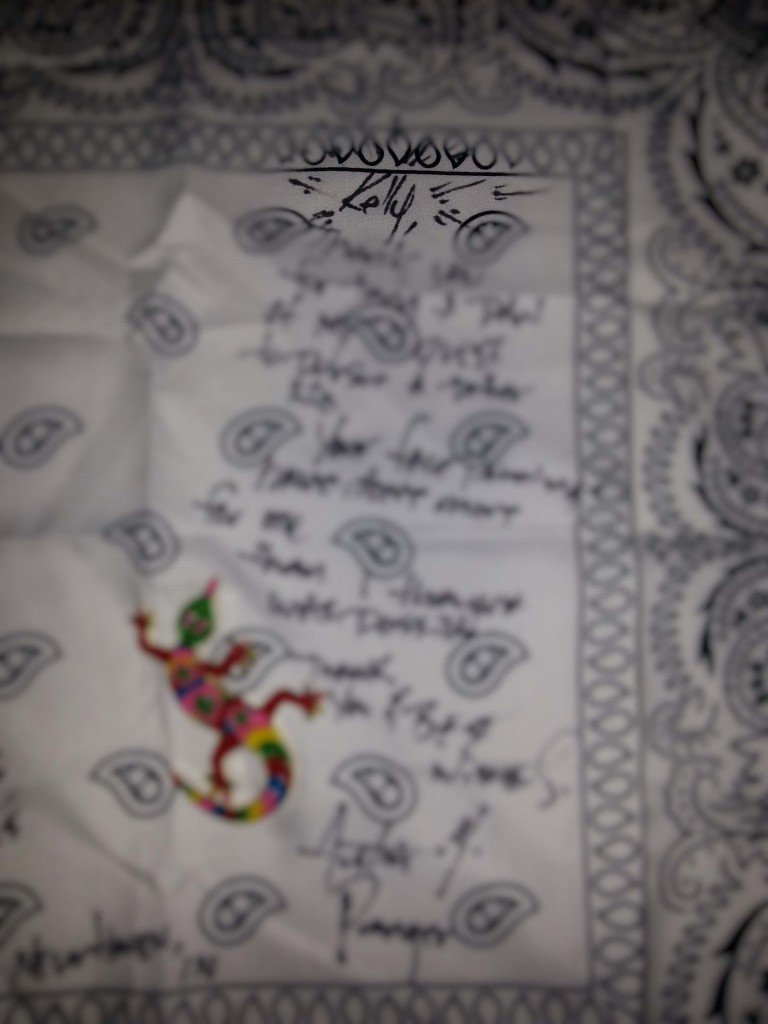