This is a re-post from Facebook (from a private group).

The 10 Second Tavern — An experiential moment of growth in a battle between the Heart and Resistance. A little “that makes sense” experience to most, but quite substantial micro-experience for someone who has lived on the sidelines for most of their life (aka: me)

I followed the impulse to visit the cemetery on my way home Sunday night. I ended up staying there for about 45 minutes, most of which I spent pacing and talking to myself/my heart/ my sister. I recorded most of it, out of curiosity, and a lot of personal wisdom came through. Some new, some not.

I won’t get into all of what came through here, but one particular experience is what I want to share – mostly because it was significant for me, even if it doesn’t seem so on the outside.

I’m discovering, with repeating experiences, that I am most “like myself” when I’m alone, completely isolated from people, the world, etc. Like when I’m in my room with no devices on, no access to the internet — or pacing the cemetery by myself, late at night.

There was a particular feeling of internal wisdom that was being felt, but I couldn’t fully express and articulate as well as I wanted. I still can’t, not even in writing, and the takeaway for me in that moment – is that perhaps I am not ‘allowed’ to be able to articulate certain things, maybe it’s life’s curious way of telling me to feel, experience, and understand it exclusively for myself first, foremost, and last. That what I’m feeling is only meant for me, and my heart just wants me to “shut up and feel it.” Which makes perfect sense when a lot of my self-discoveries and personal direction is oriented towards self-actualization and being insular. In learning how to listen to and trust myself for most things in life, not rely on other people to make decisions that only I can make.

I know that it had to do with some element of insularity, authenticity, freedom to live life, an awareness of what’s really important, and that I’m not really tapping into who I really am.

In particular, the aspect of “doing things now, not later” when you get the idea to do something, really surfaced again. It’s a recurring thing for years, but it keeps getting more and more significant as time goes on.

For example – I might think, “I need to start meditating,” and instead of doing it right then and there, I would “schedule it for tomorrow” or “schedule it for later that evening.” When I needed to, in that moment, recognize, “I need to meditate right this second,” if my situation allowed it. And if I couldn’t, then I should do it immediately after/next — and not distract myself with FB/IG/YT as soon as I was done with that “other super important thing.”

Many things sit in my “backlog” for weeks or months before I do it, even if it would only take 20 seconds to complete.

Eventually my fingers and toes were starting to hurt from the cold, so I finally got in the car, finished talking, and made my way home – every time I visit the cemetery, I end up roaming around old ‘stomping grounds’ for a bit, taking a long-winded path home.

I happened to drive past this little tavern that sits at an intersection. Seen a thousand times, didn’t know anything about it. Never asked about it. Never visited, even after turning 21.

For a while I have wanted to check out local places in the area to dance West Coast Swing, like in bars or other similar places.

And the thought, the impulse, the notion came in:

“What if I just stop in real quick and check it out?”

And the inner turmoil began.

I could stop in for a minute, take a look at the place, see if it’s a viable option for being a place to crash Westie Bomb style.

(for the non-dancers, Westie Bombing is getting a small group of swing dancers together and going to a venue to hang out and have a surprise dance party to whatever music they have playing.)

“Eh, I could do it later — like when I’m ‘going to spend a whole day exploring dance-able bars.”

But when the hell is that going to be? I’ve been wanting to do that for well over a year.

“It would be super weird to just stop in for a minute and leave. What would people think?”

“I’ve never been to a bar by myself.”

“What would I say to people?”

The light turned green and the decision was made:
I’ll just do it another day.

But I got up the next hill, and the back-and-forth was still going on, but with this new twist:

‘ I felt the impulse, that little momentary notion to do something, and I’m running away from it. I’m putting it off for another day. … ‘

and the wisdom from the cemetery that night:

‘ … the change I seek in life doesn’t happen tomorrow, it happens in these little moments of now. The trajectory of my life evolves in the NOW moments, not in scheduling it for tomorrow. Each moment is an opportunity for a new life. ‘

And that’s nothing new. Something I believe and understood.

But have NOT been embodying and LIVING.

All talk, no walk.

The realization hit me – and my body was getting all awkward feeling as it was starting to hit ME, and not simply be a passing thought. This was a moment of NOW, an opportunity to experience, not just talk.

I pulled to the side, hesitated for a moment (rubbing my face in anticipation and fear) for a couple of minutes as cars drove by … did a 180 and drove back.

My whole attitude and personality was so very different in THAT moment. My posture, my gaze, how I walked, the internal dialogue, the calm within — etc.

It literally did feel like I had stepped onto a different trajectory, like a different conveyor belt of life that just did a fork-in-the-road in a different direction.

I parked, walked into the tiny little tavern. There wasn’t a lot of people, but it was small enough that it didn’t take a lot of people to look moderately busy.

I walked about halfway in, far enough to look at the floor.

Internally I said to myself: “… Nope.” And walked out. Probably less than 10 seconds spent in that tavern.

I didn’t even bother with getting a drink or even acknowledging others.

I didn’t worry about the fear of what I should or shouldn’t do in that moment.

I didn’t worry about whether or not I looked weird as shit for just walking in, doing a 180 and walking out.

I didn’t care about what others were thinking. I didn’t even know or care if they were looking or had even noticed I was there.

I felt like an independent agent on some mission in unfamiliar territory I would never visit again around people I might never see again – and nothing was going to derail me from what I had set out to do. Suddenly the fear of that tavern, of being in that situation, was so infinitesimally small that nothing I feared prior had any significance.

It was an insane feeling, one that I haven’t experienced a lot as a result of people pleasing, caring too much about what people thought, and not having had a lot of internal confidence that I am ‘allowed’ to do what I want to do.

I didn’t acknowledge or really look at people because that wasn’t why I was there. I was there to see if it was WCS-able (and because I knew I had to face that fear and all the voices of Resistance).

That was it. Mission accomplished, I can leave.

To most people, I know that it’s not a big deal, but I am not most people (just as everyone else is individually not ‘most people’) – and my experience, my past, is mine and not theirs. This was a moment for my own experience and growth, not for other people. My responsibility is me, not in worrying about what others think.

Spending 10 seconds in that tavern — making the decision to turn around and walk in and then out — alters the trajectory of my life in a small way now, but substantially over the long term. Especially as I continue to listen to moments of now.

The significance is in actually acknowledging that moment, that impulse, that intuition – and DOING something with it, not just saying, “YEAH THAT’S GREAT … let’s NOT do that. Let’s ignore what I intuitively know I need to do and reinforce that my intuition is not worth listening to.”

Victory for the heart. <3

// Photo by Elliott Blair on Unsplash 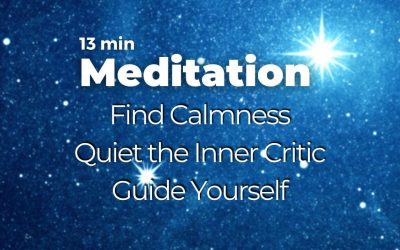 My first ever “guided meditation” focusing on finding my calmness, quieting the inner critic, and guiding myself to my own answers. 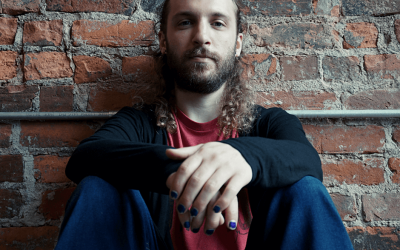 I’m stepping away from social media and other distracting mediums and activities for a period of time – to create space for my heart and more meaningful activities and connections. 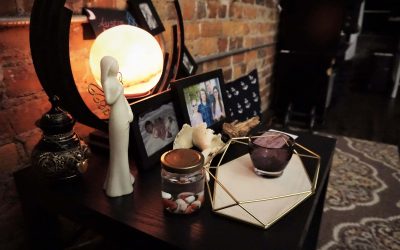 My Altar: Bringing “Ceremony” Back Into My Life

My “altar” has brought back elements of spirituality, prayer, intentionality and more to my daily life – something I’ve “missed” for years.